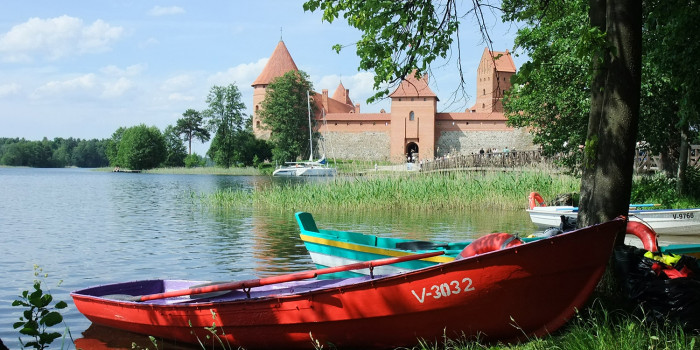 Dear Rasa, it’s great that you decided to answer a few questions for my Vegan Voices series! Maybe you can introduce yourself first :)

Let’s say I’m a person that’s always in change, always doing something new. Not as I’m extremely distracted, maybe just extremely curious and fascinated about many things. Probably the only thing that hasn’t changed in my last five years is being vegan. Although many aspects of it did change: I became better at cooking, met a lot of other vegans and realized, that I could do even more, so I got involved in animal rights organization.

What was the reason for you to become vegan and when did you decide so?

It happened about five years ago and quite unexpectedly. I already was vegetarian for about four years then and never had an aim to become vegan one day. But I was surfing Internet for some cookie’s recipe and ended up in gyvunuteises.lt (en. – animalrights) website where I read an article about milk industry. I was totally shocked! As a vegetarian I felt like I do enough for animals, but as I read that article it stroke me that milk and meat industries are interrelated as cows need to be impregnated to produce milk and calves are taken away shortly after birth so that milk can get on my table while calves are taken to slaughterhouse if they’re male as they are useless to dairy farms. Right that moment I realized that going vegan is the right and probably the only thing to do about that.

Yes, I’m a member of animal rights organization called Asociacija “Už gyvūnų teises” (en. – Association for Animal Rights). It’s has been working as an AR group for over ten years now and it’s because of their website gyvunuteises.lt, which for years was the only website in Lithuanian focused on the issue, that many people made the connection between animal products and a suffering involved to produce them. Organization makes mostly educational events on animal rights and veganism, expresses its position towards animal issues in the media.

How many members do you have in Asociacija “Už gyvūnų teises”? What are your tasks there?

It’s been just around one year since our organization became an official NGO and somehow it became a huge game changer for us. We are still in transition, restructuring our aims and procedures, so it’s quite chaotic at the moment. There are about ten people who have been more active during this year, although we also get help from volunteers. As it’s not so many of us, and most are active in other areas as well (for example: human rights), also having jobs and studies, everyone ends up doing everything. I mostly take part in event organizing and writing articles for the website and media, others also do design management and public speaking.

You told me you have also been to the Animal Rights Conference in Luxembourg in 2014. Can you tell us a bit more about it?

It was my first AR conference and it gave me a great boost both personally and as an activist. We came together with members from Estonian and Latvian AR organizations. Estonian activist from Loomus presented her research on slaughterhouse workers in Estonia. Also a Latvian activist from Dzvirnieku briviba did a presentation on NEAR (Network of Eastern European Animal Rights) – an AR organizations network were Asociacija “Už gyvūnų teises” is also involved. In the mornings there were countries reports and it was amazing to hear how some organizations are making huge progress in their countries. There were also presentations that made me cry, like ones about investigations into animal farms and institutions doing animal testing, also experiences of activists who were imprisoned. During the conference I felt like a sponge, trying to absorb as much information as possible. Also seeing how many AR activists and how great, compassionate and active they are made me feel good and confident, like there is hope for animals after all.

What about Lithuania? Would you say that it is easy to be vegan or vegetarian there? Do people normally know what you mean by vegan, if you say that word in a restaurant?

I don’t think it was ever easier than now. Vegetarianism is definitely on the rise and many restaurants have something vegetarian on their menus. Being vegan of course is harder as quite often when you ask if these vegetarian dishes could be made vegan, you get a negative answer, as in many places it is still believed that cooking without eggs and dairy is impossible. There even are places where even fish dishes are marked as vegetarian options. And if you get a positive answer, that dish is or could be made vegan, you have to be extra careful and ask many questions to make sure, as people seem not to be aware of the differences between vegetarians and vegans. Good news are that at least in Vilnius, there are quite a few vegetarian and raw food restaurants where you can get vegan food too. And it’s not only stews and soups, but also vegan burgers and cupcakes. We don’t have any entirely vegan restaurants yet, but just few days ago the first vegan shop and e-shop veggo.lt opened it’s business, so now it’s possible to buy things like vegan cheese and sausages, seitan, tempeh and even vegan dog food.

In Germany really a lot of people decided to become vegan in the past 2 – 3 years. Did you also notice that in Lithuania?

Vegetarianism is definitely on the rise and I think veganism is too, or at least I encounter more and more people that are or want to go vegan, but seems like most of them see veganism as healthy diet instead of cruelty free lifestyle. For several years now raw food trend is quite strong in Lithuania. In Vilnius alone there are several raw food restaurants. It’s associated with healthy living, but most people do not realize that most of raw food dishes are actually vegan while veganism itself is still seen as something extreme.

How would you describe Lithuanian people?

Once I made a joke, that Lithuanians love to be the last and it’s almost true as most of the things we are proud of are from the deep past: our language, which is one of the oldest in Europe, being the last pagans in Europe and of whose great medieval times of Grand Duchy of Lithuania, when our country was from Baltic to Black sea. Lithuanians are also very creative people. As a nation we have been through a lot and I believe that it takes creativity to survive and if you can not get something, you have to think how make it yourself. Even a lot of young people I know can knit and sew, make jams and even furniture. It’s so common that we do not value it enough, which is also Lithuanian character feature – being pessimistic about the present moment.

Where is your favorite place in Lithuania?

Lithuania has beautiful nature and I feel recharged after spending few days somewhere in a forest or by a lake. But if I have to name just one place, I probably would choose Trakai. It’s a small town near Vilnius surrounded by lakes, easily reachable by bus or train, or even not too far to cycle. Sometimes I go there just for several hours to walk around, row a boat, swim in a lake or have a picnic alone or with friends. Vegan food is the only thing missing there.

And do you have any advice you’d like to give to other travelers in Lithuania?

I would advice to visit not only Vilnius. There are many things to experience both in other towns and nature. For vegan travelers I would advice to be prepare to not get vegan food on every corner and ask many times in details what one or other dish is made of before you can be sure it’s vegan.

What is your favorite Lithuanian dish? Can you tell us your recipe?

I’m totally a potato person and luckily many Lithuanian dishes contain them. My most favorite probably is Kugelis –  grated potato pudding, which I recently learned is most likely a Jewish dish. It’s very easy to make a vegan version of it. All you need is some potatoes, a few onions (more onions = juicer dish, I usually use 2-3 of an average size), some oil, salt, pepper, caraway seeds and maybe some other spices that you like. Peel potatoes and onions and grind them in a food processor until it’s a mash. Yes, it’s raw potatoes you have to grind, not cooked. Mix the mash with spices and oil, and pour into a oiled baking form. Cover baking form with aluminum foil and put it into a heated oven at around 175 degrees. Depending on your oven and size of a baking form, it takes 45-120 min to bake. Check it regularly with a wooden pick and if baked well, it does not stick to a pick and also has crispy top. My favorite sauce to go with kugelis consists of natural unsweetened soy jogurt mixed with salt and few grated garlic cloves.

Thank you a lot for your time :)