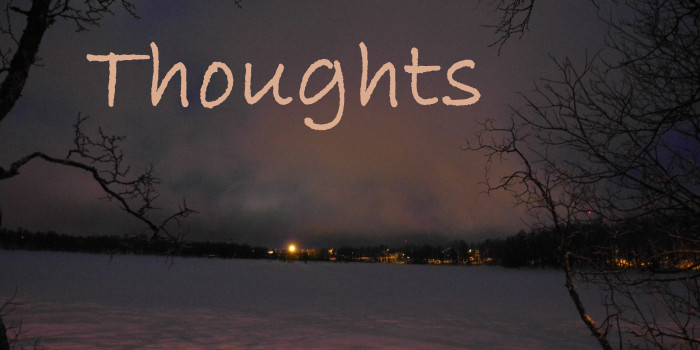 I guess my last posts about Tromso didn’t sound so positive. (Maybe it’s not such a good idea to refer to a blogpost which is only published in German so far… but I just feel like writing in English right now. But don’t worry, I’m already working on a solution about the “I’d sometimes like to write in English”-thing and this will be my one and only chaotic blog post in English on my German blog.)

Well, you know, while living in a foreign country with a foreign language there are so much things happening in the first weeks. It still feels like being on a rollercoaster. Up and down, up and down, up and ? (Okay, to be honest for this evening it already went a bit down as I wanted to talk to my sister. Which I haven’t talked to since I arrived in Norway. It was planned, but well… let’s leave out the details and just say she can’t anymore. And I’m quite disappointed.)

The last week I spent a lot of time thinking about different things in my life, my plans for the future, things in our world, but I also kept myself busy with organising the vegan bake sale and planning the vegan evening I want to organise in the library where I’m doing my internship. And started panicking ;)

You have to know that I’m actually an incredible shy person. Therefore I hate to talk in front of people. I already have problems if there are only ten people or not even ten people, but I truely hope that there will be more people coming to the vegan evening. (Although there might be a tiny voice inside me saying that it would be easier if there wouldn’t be so much people ;)). But actually I’m quite sure about my goal with this event: I’d like to spread veganism, show how easy it is and in the best case animate people to think about their actions or inactions. Still… I’m utterly scared of talking about a topic I’m passionate about in front of hopefully a lot of people in English. It scares me even more because it is a topic which is personally important to me, so it’d be even more disappointed by myself if I mess it up.

As I mentioned before I also thought about a lot of stuff in our world that week. And in my opinion it’s quite easy to get depressed then. So many awful things happening out there. However, there was one point when I realised how grateful I can be right now. I have the feeling that I’m not alone. There are people in Tromso which I at least started trusting. (Me and trusting someone is already another different, complicated subject ;)) Moreover I met so many inspiring people in the past 12 month. In Latvia, Estonia, Lithuania, now in Norway as well, but also in Germany. Not all of them are vegans (although I do have to admit that most of the people I’m referring to are somehow connected to animal rights/veganism), but there were just so many people who were passionate about something and they try to make the world somehow a little bit better. And that’s motivating me.

You have to know that I have never been such a super-social-doing-everywhere-everything-person. I have never been active in any organisation, didn’t even attend recorder lessons neither joined the local sports club like almost everyone in my tiny hometown. And although it might have been wrong, I think I even didn’t like these people “superperfect people” so much. But maybe there was also a tiny voice inside me which admired them a little… although I’d have never admitted that. I think in general I changed a lot in the past years – for good, I think.

I just felt like writing some thoughts of me down. It became quite personal in comparison to the rest of my blogposts and as I’m writing these lines I’m still thinking if I should really publish it. Moreover I guess most of you came here to read about recipes, so you might get bored of all my Tromso/personal posts as well. And one last thing: Please don’t get me wrong, I never meant to say that only vegans and/or activists are active & “good” people, if it sounds like that. I didn’t grew up as vegan and I already told you that I have never been an active member somewhere or something like that ;)